Glacier National Park is a hiker’s paradise, with the beauty and majesty of a view from a high mountain pass being many of the top hiking destinations.

Of course, the hikes up to renowned saddles like Swiftcurrent Pass or Pitamakan Pass are long and tough — being a strong hiker is a prerequisite to make it up while having a good time too.

What about folks that want an easy to moderate hike under 3 miles that will achieve a spectacular view of Glacier’s alpine peaks and lakes? Enter: Hidden Lake Pass.

Located a mere 1.5 miles uphill from the Logan Pass Visitor Center, the hike up to Hidden Lake Pass is a popular one. For experienced hikers it will seem crowded, but for the average Glacier visitor, it’s a great foray into the Rocky Mountain permafrost. 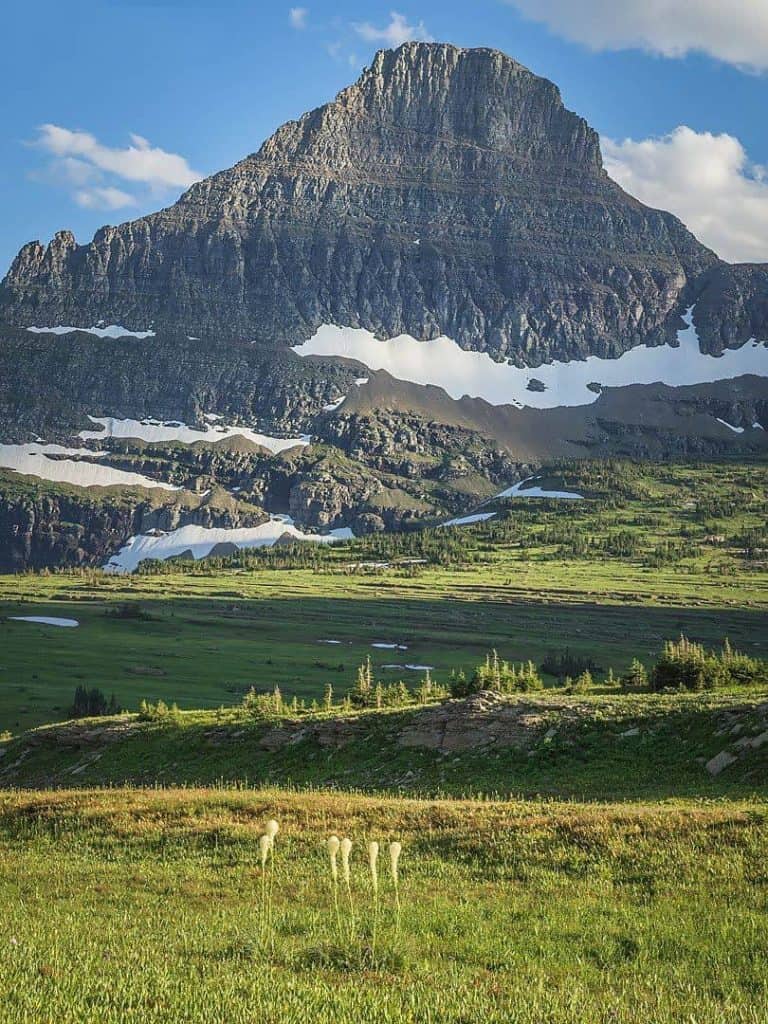 Logan Pass is perhaps the top destination for every Glacier visitor. At the summit of the infamous Going-to-the-Sun Road, the landscape surrounding Logan Pass in summer is a wonderland of alpine wildflowers, green fields, high peaks, and wandering wildlife. It’s also the busiest place in the park.

Most days in July and August, the parking lot at Logan Pass is plumb full between 10am and 6pm. It’s best to arrive early in the morning or later in the evening. There will still be crowds, but at least you will be able to find a parking space without problem. Of course, utilizing the park shuttle service can eliminate this concern as well.

Once you’re at Logan, definitely swing through the Visitor Center here. There’s a nice little exhibit about the plants and wildlife that inhabit the alpine tundra that you will soon be traversing. 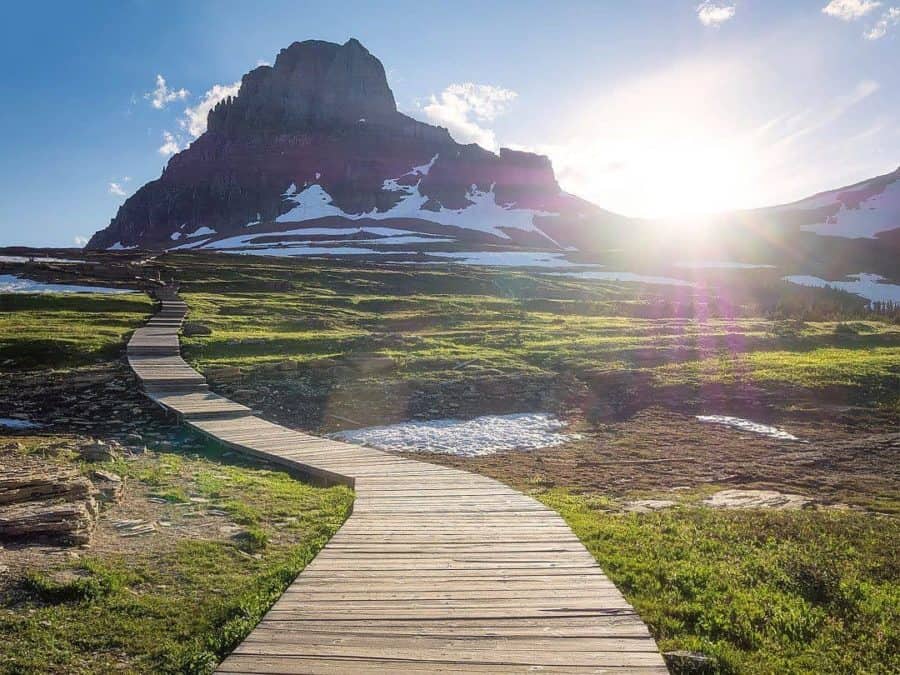 The Hidden Lake Trail heads south from the back door of the Visitor Center onto the alpine tundra. There’s a little paved nature trail that makes a two minute detour and has some more interpretive signage to further explain the surrounding environment. Eventually, the pavement turns into a boardwalk that guides visitors through the tundra without excessive damage by footsteps to this fragile ecosystem.

By the way, off-trail hiking has been outlawed in the Logan Pass area for this same reason. There are so many people tromping through during the summer months that the NPS decided that allowing visitors free mobility would ultimately lead to irreparable destruction of the sensitive plants and grasses of the area. As such, if you visit, please stay on the boardwalk and help keep Logan Pass beautiful and healthy for the future.

On the confines of the boardwalk, the surrounding scenery is jaw-dropping. I visited with my wife in mid-July and the tundra was alive with greenery. Always the tough critic, my wife was not that impressed with Glacier’s lower elevations, but when we set off down the boardwalk among the fields and the peaks, she said, “Now this is pretty!” 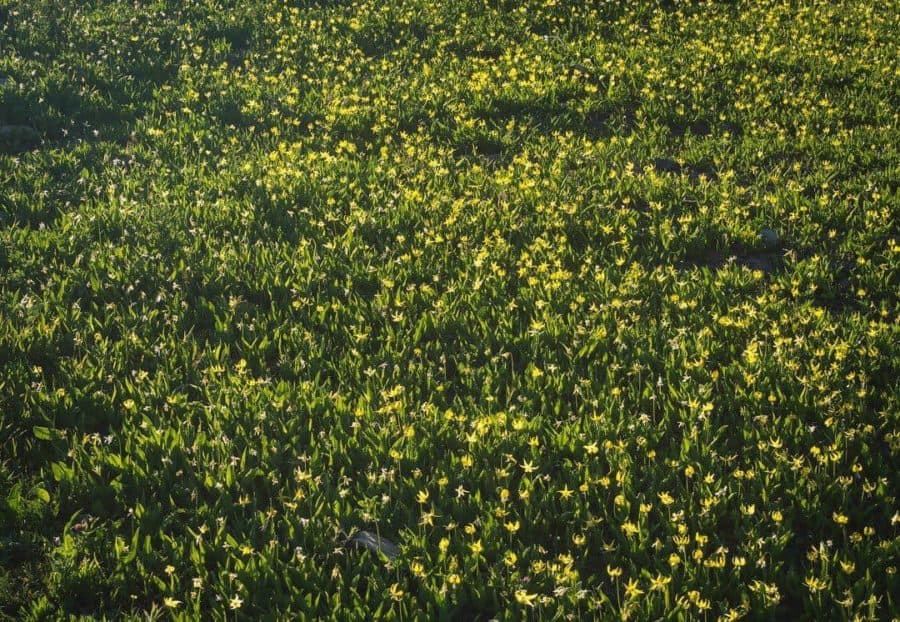 July and August provide a spectacular wildflower show along the Hidden Lake Trail. When we visited, fields of glacier lillies carpeted many of the hillsides. These tiny but gorgeous blooms are visibly fragile, making for visible evidence that one step of the boardwalk could be like a scene from Honey I Shrunk the Kids for these wildflowers.

The glacier lilies bloom shortly after the winter snows have melted from the tundra, so July is the absolute best time to catch them in action.

We also happened to catch a banner year for blooming beargrass. These odd but charming bulbs are more common in the subalpine forest below Logan Pass, but a few had grabbed hold of the tundra along the trail. Of course, these flowers only bloom en masse once every five or ten years, so count your blessings if you catch them when they explode.

A visit during August, perhaps even early September will reveal another wave of different wildflowers to enjoy — featuring among others, my personal favorite: yellow columbine. 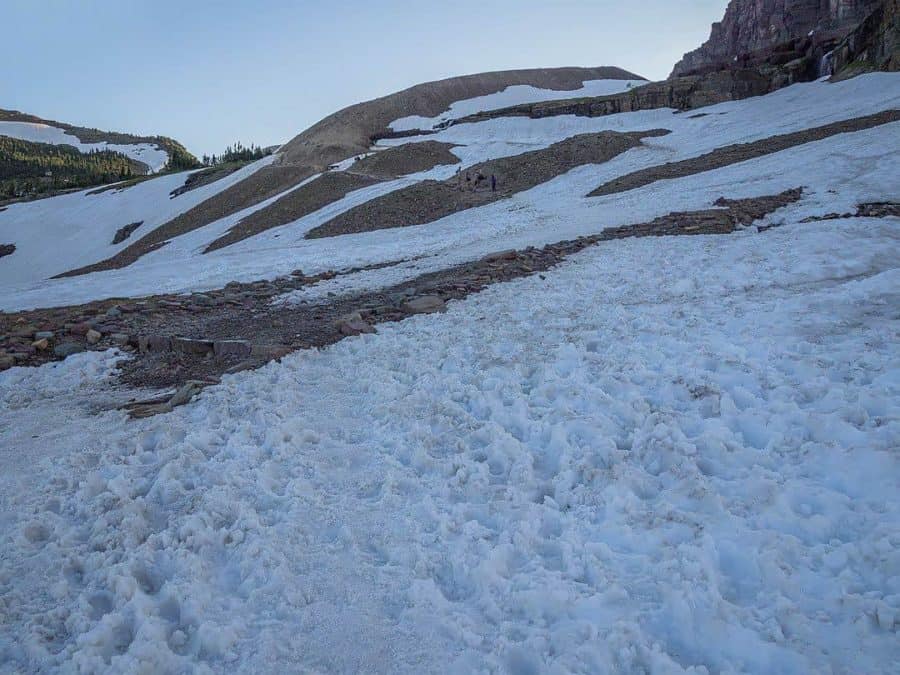 Our July visit included a good dose of snow still present on the tundra…and the trail. During the first half mile, everything was clear, but eventually we headed far enough uphill that the boardwalk veered right through a slippery snow bank.

With lots of foot traffic coming through, the snow was tramped down and slick, which made for a bit of a challenge to walk up. After we climbed the first patch, there was an undulating series of snow crossings to be had as the trail traversing the base of the Clements Glacier cirque.

At one point we had a nice look at the small but impressive Clements Glacier, only to wonder what this mass of snow and ice looked like in years past. 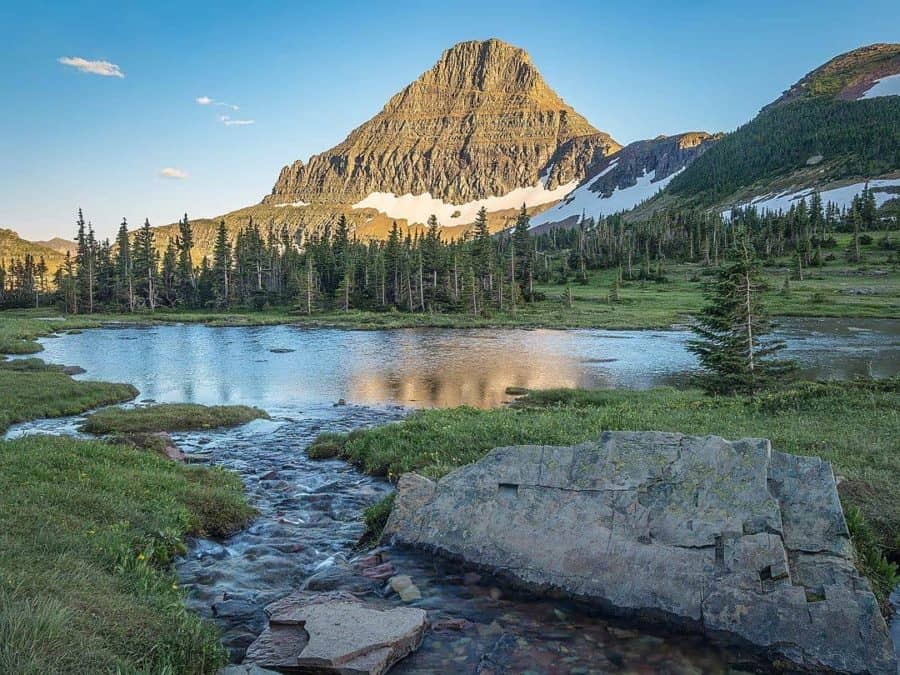 In many places, the snow was still so thick that it completely hid the boardwalk, and path of trampled snow led onto a soggy, muddy patch of tundra instead of the wooden walkway. My wife decided to turn back around here somewhere, as it was late in the day, getting chilly, and the snow and mud crossings became tedious. As she headed back down, I continued, with plans to enjoy sunset at the Hidden Lake Overlook.

Before the trails levels out before the pass, there’s one pretty steep section with loose gravel and some snow that was definitely the most challenging of the hike. Once past it, the trail passes a small creek coming off of Clements Mountain that feeds a couple small ponds. Beyond is a nice view of the St. Mary River Valley to the east — a little warm-up eye candy for the overlook not too far up the trail. 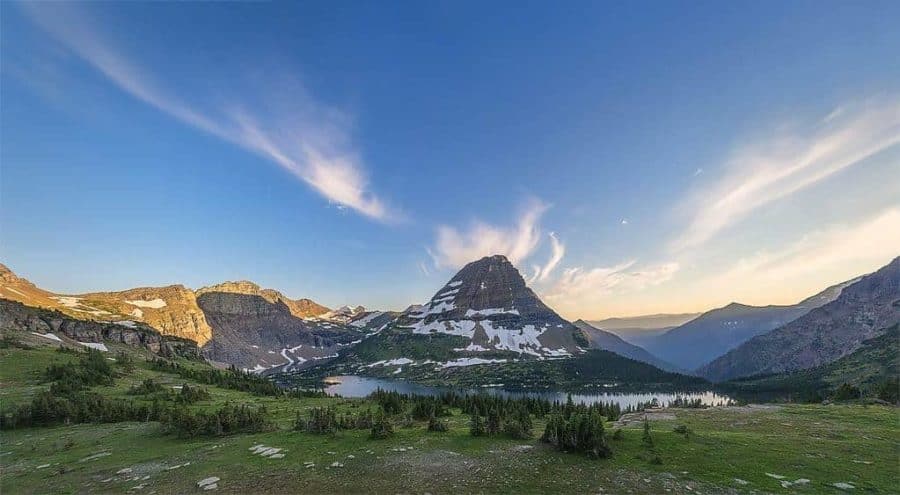 The boardwalk stops at the Hidden Lake Overlook, a rock outcropping on the shoulder of Clements Mountain. The view is stunning, with 8684 ft. Bearhat Mountain dominating the landscape as Hidden Lake fills the basin below.

The trail does continue down to the shore of Hidden Lake, but the day I was there, the trail was closed beyond Hidden Lake Overlook due to grizzly bear activity. There was an obscene amount of rope and signage indicating the trail closure, and a photographer at the overlook told me that the rangers in Glacier don’t mess around. He knew first hand, previously getting caught hiking in a closed area and nearly receiving a ticket.

I didn’t have any plans of hiking any further on that occasion, but it was a bit disappointing to be confined to the boardwalk here as I myself was setting up a tripod and camera to shoot sunset photos. With a handful of other photographers there, we made the best of it and enjoyed the view.

No grizzly bears were seen, but a family of mountain goats was grazing in the area, and then dropped down onto a meadow below to continue their dinner. 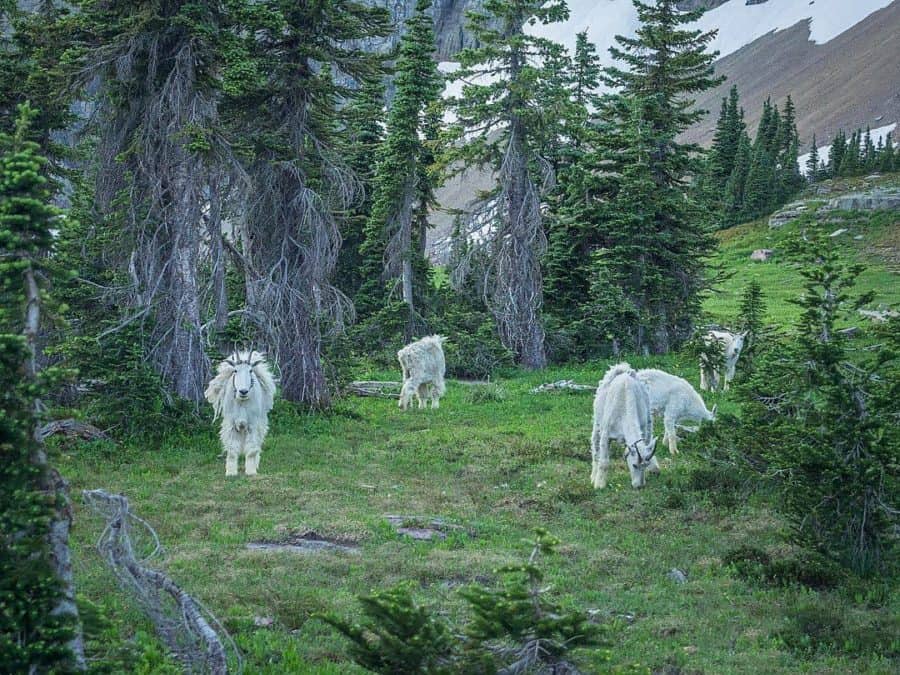 After sunset lit up some golden clouds, the light started to dim and we all bolted back down the trail. Of course, descending the steep, snowy slopes required some care, but the magenta hues of dusk provided a stunning backdrop for the hike down.

The crowds of tourists on the boardwalk were now gone, and the peacefulness of the Glacier high country rang through.

Although a busy hike, this one is well worth it, especially if you don’t have the means to hike to one of the more remote backcountry areas. A early start, or a sunset hike is fantastic way to do it — avoid the crowds at the parking lot and on the boardwalk. Just don’t forget the camera, and be prepared for a little snow, even in July. 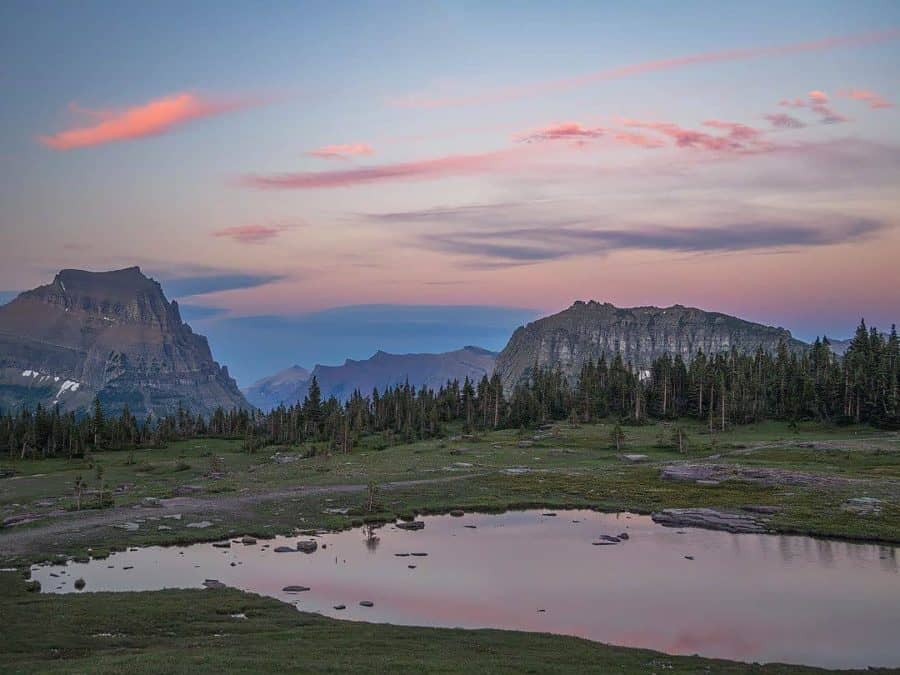 Going-to-the-Sun Road up to Logan Pass is typically closed from November through June, although an early snowfall can close it in October, and a heavy winter can keep it closed as late as mid-July.

For current conditions, be sure to check Glacier National Park’s plowing status and road status pages.

Glacier National Park is bear country. Each hiking group should carry bear spray and know how (and when) to use it. The park recommends that hikers travel in groups of 3 or more (safety in numbers).

The alpine areas of the Rocky Mountains can have harsh and quickly changing weather patterns. During summer, thunderstorms can blow up quickly, and the mostly treeless terrain of Logan Pass is no place to be caught in an electrical storm. Be sure to check the weather forecast before you go, and bring rain gear if rain is in the mix. Fall hikes in October can bring about snow, so late-season hikers should check the weather reports for winter storms when planning their hike. 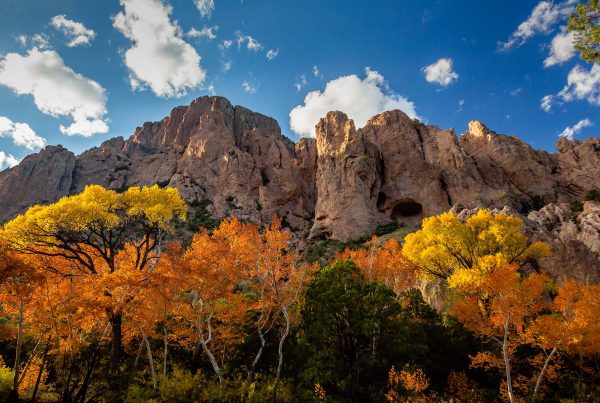 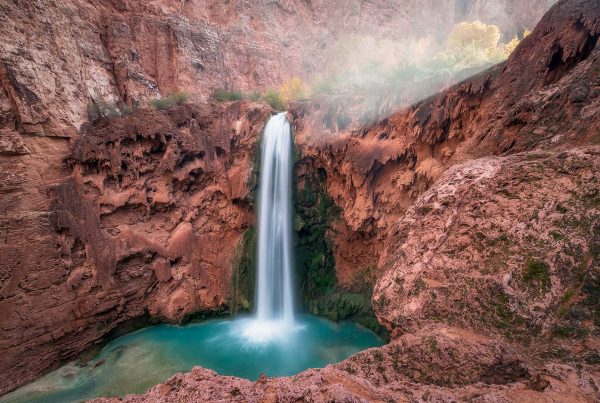 Mooney Falls: Adventure and Lore at the Mother of Waters 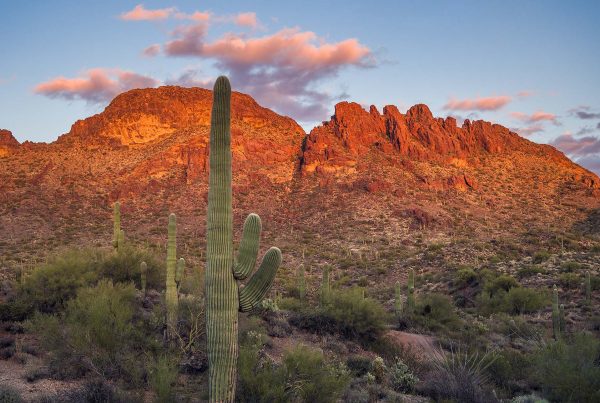